On December 14th I took the early morning train from Oban to Glasgow, and then across to Edinburgh to meet Angela Constance, MSP, at Our Dynamic Earth. Ms. Constance is the Scottish Cabinet Secretary for Education, and has recently been working to promote women in science. She is particularly keen to encourage a more diverse pool of candidates for top government science positions such as the Chief Scientific Advisor and the Scottish Science Advisory Council. She says:

“Having women in senior, visible roles helps to show girls and young women that choosing science can open up a range of career possibilities.”

You can find more details of Ms. Constance’s statement here .

This is quite inspiring! Since I’ll be taking part in the  Homeward Bound Project over the next year (see previous post!), it seemed like a perfect opportunity to make contact the Scottish Government. Homeward Bound‘s main aim is to support women, specifically with credible scientific qualifications, to significantly improve their clarity, confidence, shared vision and strategic capability. In doing so, the project will empower women in science to take up leadership roles globally, and to more proactively contribute to a sustainable world.

After a few weeks, the SAMS communications department managed to set up a meeting, and I found myself on my way to Edinburgh with Neville, my toy macaroni penguin by  my side. The trip was not without excitement – thanks to Neville, I met Richard Paterson on the train, better known as ‘the nose’ in the whisky industry, who told me the story of whisky left behind on Elephant Island by Sir Ernest Shackleton and his expedition team in 1909 – more about that in another post!

With Neville the Macaroni penguin, on the way to Edinburgh

Having already met one industry legend, I was full of energy walking to my meeting with Ms. Constance – was it nerves? Or was it just the coffee? Turned out I needn’t have been worried. Ms. Constance was lovely, and very chatty, as were all of the staff from Our Dynamic Earth and the Scottish Government communications team. We discussed the Homeward Bound Project, the expedition to Antarctica, and coping with cold weather (Ms. Constance has been to the Arctic, and I grew up in Canada). Most importantly, we discussed how to inspire more girls to take up science and other STEM subjects, as well as the need to reduce the attrition rate of women throughout their science careers.

After about 10 minutes of discussion and a few photographs, we each did a short interview for the Scottish Government communications team, and then Ms. Constance had to head off to her next engagement. On my way home, I kept thinking… ‘I should have said this’… or ‘why didn’t I say that?’. It was my first meeting with a minister, and I’d prepared well. I’d picked my three points to get across, and I managed to mention at least two – not bad. 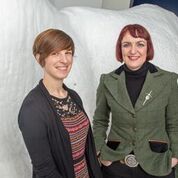 With Angela Constance, MSP, at Our Dynamic Earth

There is always room for improvement, but the Scottish Government communications team did a fantastic press release, which was picked up by three newspapers (two National!), two radio stations, and local online press. It’s always a little uncomfortable to see yourself pictured and quoted in print, but I’m proud of the coverage – in general I think the papers did a good job. Of course, not everything was exactly as I said/intended (see Times article title!), but I suppose that’s how it goes sometimes with the press. For anyone who has seen some of the articles, I’d like to confirm that I am not ‘born and bred’ in Glasgow, nor was I ‘brought up there’. I do have Glaswegian family though! I certainly learned a thing or two about talking to the media, and the difference between what goes out in print and in a radio interview. Certainly, I won’t be reading the comments sections under the articles! I’ll write more about my experience with the media in another post later.

‘Female scientists overlooked, says explorer’ in the Times (Scottish News) 31st December, 2015. Not quite the title I’d imagined, but not a bad article overall – Homeward Bound is, indeed, a ‘ground breaking’ expedition!

‘Scots scientist Dr. Raeanne Miller is heading for the Antarctic to take part in a women-only expedition’ (the photo in this one isn’t great!)

‘Scot Heading to Antarctic’ on KingdomFM online and on the air, 3rd January 2016, includes a short interview.

Finally, I am looking to pull together funding for the project, to a sum of about £9000. I’ve already contributed £1000 of my own savings, as I really believe in the good this project could do to empower women in science. I’ve just launched a crowdfunding campaign at www.gofundme.com/HomewardBound2016 – check it out! I’m working with some fantastic artists already, and hope to be adding more to the ‘rewards’ page for those who donate soon!