…an exploration of the role and ethics of communicating science.

A couple of weeks ago I participated in an event at the Edinburgh Science Festival, where I was part of a panel discussion involving a filmmaker, an arts curator, a creative art-science advocacy organisation, an ethnographer, and myself as a practising scientist. I’d hoped the discussion would centre around the role of arts and creativity in communicating and engaging people with the environment around them. Instead, the conversation shifted towards the role of scientists in creating and communicating knowledge, and whether or not scientists should advocate for environmental protection, and perhaps for conservation.

On the big screen in the theatre at Our Dynamic Earth

Its a tricky discussion to have. At SAMS, where I work, a seminar on research ethics sparked a wider debate on the role of scientists. Is it our job as scientists to present scientific outcomes in peer reviewed journals, leaving others in society to interpret, implement, and apply our conclusions? Philosophically and traditionally, this might be our most appropriate role, and one that enables the scientific community to maintain its objectivity, and avoid bias (although, it must be said that we as scientists are all inherently biased – more on that in another post).

Alternatively, should scientists not only communicate their results through different media, with the risk that those media are no longer objective – for example though news outlets with particular perspectives, or by working with organisations with particular value sets. But in doing so, do we begin to forfeit our scientific objectivity? Going a step further, there is substantial debate in the scientific community about whether scientists should or should not advocate for particular actions or activities which are associated with their results.

The panel discussion at the science festival centred around a particularly divisive topic for Scotland: the designation of Marine Protected Areas. The SHORE project, with funding from Creative Scotland, had commissioned two filmmakers to create films about coastal communities’ interaction with their local marine environment. Ed Webb-Ingall’s film, I walk there every day but I never saw it that way focused on the community-led designation of an MPA and no-take zone around the coast of Arran, while Margaret Salmon’s film, Cladach, explored the omnipresence of the sea in the daily life of coastal communities. The films sparked questions about ownership of the sea, pollution, human activities in the marine environment, and environmental conservation, shaped by the experiences of the people and communities who live there.

I had attended a previous panel event for the SHORE project in Broadford, on Skye. At both events, the most vocal audience members were those supporting the designation of marine protected areas. Often, these voices were also disapproving of marine industry such as finfish aquaculture and capture fisheries. In Edinburgh, an audience member asked, “surely, if you [scientists] don’t advocate for the environment, then who will?”

In some sense I agree. As scientists, we are privileged to have the knowledge and skill not only to develop new understanding of how the ocean system works, but also to interpret this knowledge, and in some cases, to apply it. It would be a shame to provide such understanding, without suggestion of how it might be applied to challenges such as MPA designation and development of new marine industries. However, in my opinion we must also be mindful of others with opposing perspectives to our own. It is all too easy, as an academic, to perceive scientific predictions or outcomes as the most valuable perspective on an issue (because, inherently, we value it!). For example, there are  detrimental impacts on the marine environment from finfish farming (for example, seabed discharges, disease, and interactions with wild stocks – see Marine Scotland’s guidance here). However, at the same time there is a need to provide people with sources of protein and income, particularly in developing nations or in areas where overfishing is pervasive. We, ‘society’, must weigh up the potential environmental impacts of finfish aquaculture with the potential benefits offered in terms of food provision and employment.

Collage of thoughts, notes, and words collected by the SHORE project team from the 9 locations around the Scottish coastline visited by the project.

There are no straightforward or black and white answers to these challenges. However, what has become increasingly clear to me, though participating in the SHORE project, and my other recent public engagement work, is that there is a clear appetite for science and/or a scientific perspective on many of the complex environmental issues we face. The audiences I have worked with want to know what the scientific evidence suggests or predicts – what are the facts? People are looking to us for the answers.

So to me, it is incumbent upon us to communicate scientific outcomes to the people who need them, or who are interested in them. Just as when writing a manuscript, there is also a need for clarity in distinguishing what the evidence base tells us from the actions we suggest could or should be taken. As a community, we must be mindful of what is objective (the evidence) or subjective (how that evidence is interpreted) in our work, and aware of how we, as a community are perceived by those who we interact with. In my experience, we are looked upon as knowledge providers: people who can distinguish truths from stories and fact from fiction. It gives us the ability to influence outcomes, but this is a role which we should not take lightly.

I am still developing my own perspective on how far scientists should interpret or apply their conclusions and to what degree we should advocate for particular policy or societal outcomes, but taking part in public engagement continues to shape my thinking. Its something I’d be interested in discussing further with like-minded people from different disciplines and sectors. If there are any science philosophers out there, I’d love to hear from you! 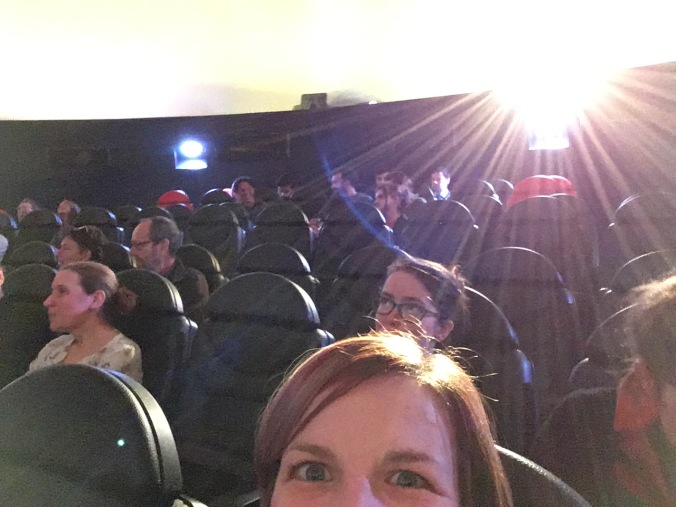 Seated and ready to watch I walk there every day but I never saw it that way and Cladach, before the panel discussion.