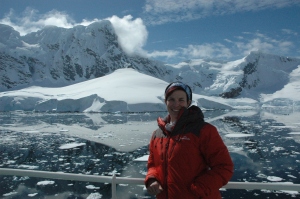 I am a marine ecologist interested in the impacts of human activities in the sea. My current work focuses on the cues which marine invertebrate larvae use to orient themselves as they disperse, and to settle into their adult habitats, and how these cues might be changed by human activities.

At present, I am using a variety of laboratory and fieldwork techniques to investigate the response of invertebrate larvae to man-made underwater sound, and more specifically the responses of biofouling organisms to marine renewable energy device noise and vibrations. I am also interested in the development of ecological communities on artificial reef structures, and the relative importance of these structures in comparison with natural reefs: to what degree do they mimic natural reef environments? And how do they differ?

My previous work included developing insight into invertebrate larval distributions and dispersal at multiple scales, from the individual larvae to regional coastlines. From 2014-2016, I held a NERC Knowledge Exchange fellowship in marine renewable energy, where I worked across the academic, government, and industry sectors to improve pathways for cross-disciplinary knowledge exchange and to build cutting-edge marine science results into industry R&D.

I am a skilled science communicator, and I work hard to encourage my fellow scientists (and particularly other early career researchers) to take part in public engagement activities. I was a co-investigator on the NERC-funded Future of Our Seas project, focused on public engagement in marine science, and I led the Communication, Dissemination, Engagement, and Exploitation work package of the EU H2020-funded Blue-Action project between January 2017 and September 2018. I have worked with schools, developed activities for music festivals, and delivered public lectures to encourage an ongoing dialogue with diverse audiences around marine ecology, climate change, renewable energy development, the history of women in marine science, and science leadership.

I was selected as one of the first 76 women to take part in the Homeward Bound Programme for women in science leadership, and in 2016 was named a ‘Leading Woman of Scotland’ in STEM by EQUATE Scotland.

Through work, study, and play, I have visited 6 of 7 continents and many countries. I enjoy traveling, meeting new people, and telling stories. I am also a keen outdoors-person – I love the mountains, running in the hills, riding my bikes, and swimming in the sea.