I have so much to write about at the moment but so little time – Antarctica, International Women’s Day, bits and pieces of public speaking… but I thought I’d start with something short, and exciting! 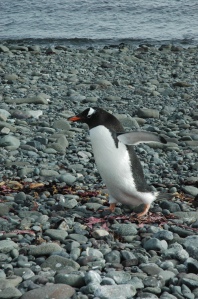 Last Friday I did my first ever LIVE radio interview! I was invited to take part in BBC Scotland’s ‘Out for the Weekend’ show, and to be interviewed by Fiona Stalker who hosts the programme. You can listen to my piece until April 10th, 2017, here: http://www.bbc.co.uk/programmes/b08h081v.

I did two segments, which were split by a brilliant piece about the penguins at Edinburgh Zoo, with their penguin keeper Lorna Moffat, who talked about their gentoo penguins.

To do the interview, I had to go to the BBC studio in Oban – sounds glamorous, but I assure you that it wasn’t! The studio is a small box – or a large storage cupboard (!), in a block of flats. To access it, you have to ask for a key at a local hotel, let yourself in, and turn on the power. It was a little daunting – I must have read and re-read the instructions about ten times. I had arrived in plenty of time, so I sat and ate a bit of lunch – a mozzarella, sun-dried tomato, and pesto panini from a shop below.

I must have been nervous… with 7 or 8 minutes to go, I got a bit of roll stuck, not in my throat, but in that awkward space between your throat and your nasal passages (you know how it’s all connected?). I coughed and spluttered and sniffed and frantically tried to drink my soda to dislodge this little crumb of panini for the next five minutes – what if I couldn’t go on air because I was coughing so much? What if I spluttered into the microphone? What if everyone listening heard me struggling with a rogue crumb of bread stuck somewhere in the wrong tube?

Luckily, it didn’t come to that. I managed to mostly get it under control, just in time for the BBC studio team in Aberdeen to call in. It was very strange – I could hear the radio in the background, but I wasn’t connected – I guess the Aberdeen team had to switch me on. After the news at two o’clock the programme started, and Fiona welcomed me to the show. I was nervous at first, but gradually settled into it, talking about Homeward Bound, Antarctica, and what it was like on board the ship. 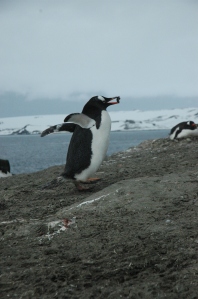 I loved listening in to the piece about penguins, and having the opportunity to react to it – we also saw gentoo penguins in Antarctica – they were picking pebbles to maintain their nests, and stealing them from their neighbours. Most had eggs, although some were still attempting to mate – and more than anything, they were smelly, and noisy! The sound of a penguin colony is not something you forget anytime soon.

Next time (hopefully there is a next time!) I don’t think I will be so flustered – it was a good learning experience! Often, I hate listening to my own voice when it has been recorded, but listening back – this time I don’t think it was so bad! Again, have a listen to the programme here and see what you think!

Hopefully this is the start of some more frequent posts again – one of our Homeward Bound Faculty, Marshall Cowley, wrote in a facebook post today: “It’s only too late if you don’t start now”. Great advice! So… watch this space!