Looking ahead from the RV Seol Mara

Steaming past the Lismore lighthouse

Last week I embarked upon my first fieldwork campaign in eight years. Yes – you read that right.

The last time I was on a research vessel (even one as small as the Scottish Association for Marine Science’s (SAMS) Seol Mara) was in 2011. It was the second research cruise of my PhD, and I was out with one of my supervisors for a week to collect zooplankton samples at different depths in the coastal waters near our marine lab. I had the support of my PhD supervisors, and I’d been on a research vessel at least once in each of the two years previous. I didn’t entirely know what I was doing, but I also had a bit of a safety net.

This time it felt different. I became a post-doc in September 2018, five years after finishing my PhD. In the meantime, I’d done lots of interesting things, mainly working to interpret, communicate, and generate impact from marine science, specifically in the marine renewable energy and climate science fields. What I hadn’t done in those years was plan and execute a ship-based fieldwork study.

Suddenly, I was the lead scientist (the only scientist!), responsible for everything from booking ship time to purchasing and/or testing kit, from writing risk assessments to finding an extra pair of hands to help out. No longer, could I rely on PhD supervisors to guide me – I had to figure it out myself. I learned a lot!

In the interest of being honest about research and its up and downs, I wanted to share a few of my reflections on planning a fieldwork campaign.

1) It is never too early to start planning – especially when you are working from a new perspective and/or have to learn ‘the system’.

It was November, two months after starting my new post, when I decided to go ahead with this piece of fieldwork. I had unfinished business (unanswered science questions!) from my PhD, and I really wanted to get the SAMS plankton pump back into regular use. I also wanted to write my paper on the vertical distribution patterns of barnacle larvae in well-mixed coastal environments, but needed another year of data to do it.

Four months seemed like a reasonable length of time, but with Christmas in the way and a few key obstacles to overcome, the weeks quickly melted away. For example, my grasp on how to book a research vessel at SAMS was fuzzy, at best, and had changed since I last used the vessels in 2011. I’m based at SAMS, but am employed as a researcher by the University of the Highlands and Islands, to which SAMS is affiliated, and it was no longer clear if I was an ‘in house’ researcher, a commercial client, or an external researcher. I had to ask a lot of questions! Furthermore, my main piece of equipment, the plankton pump, hadn’t been used in eight years, and needed PAT testing for electrical safety before I could use it. The PAT test machine at SAMS had other ideas, and promptly went out of service as soon as I needed it! Luckily, the PAT tester was repaired in time, and I breathed a sigh of relief. I could finally test my equipment prior to fieldwork deployment – except that the vessels were fully booked in the days/weeks before my cruise dates, so I wasn’t able to give my equipment a full test before fieldwork day 1. Thankfully, after spitting out a bit of rust, the plankton pump worked, and we were able to sample from the beginning.

Plankton pump with CastAway CTD attached, and CTD side by side

I’d like to say that I had everything planned and ready to go weeks before my scheduled ship time, but I would be lying. For the sake of honesty, I definitely admit to having a refresher on CTD operation at 4pm the Friday before my week of ship time. It happens. But these things didn’t derail my fieldwork because I’d thought in detail about what I was going to do and how I was going to do it well in advance and spoken to the right people. Planning is important folks!

Do it! Ask away. Ask lots of questions.

I discovered that most of what was simultaneously making me anxious and making me procrastinate in fieldwork planning was dealing with the unknown. There were many things that I didn’t know, from who was going to operate the winch on the vessel (I hoped it wasn’t going to have to be me!), to whether or not lunch was included in my vessel booking fee (turns out it was). I didn’t know if my plankton pump was going to work on our smaller vessel, Seol Mara, or where its transformer/fuse box would sit in the cabin. I didn’t even know if I was going to be able to get some help from willing volunteers on some of the days!

In hindsight, the solution was to ask lots of people lots of questions. I think the technicians were pretty fed up of me by the time my fieldwork week came around (thank you for your help, if any read this!), but they were also able to give me all kinds of information and ideas. For example, one of them suggested putting a CastAway (really tiny!) CTD on my plankton pump so I knew its exact deployment depth. Speaking to so many different people was also great for giving my science a bit of visibility in the lab, and served to ease my anxiety and give me confidence in my plans as I approached my fieldwork week.

I’ve already mentioned the PAT tester needing repaired just as I needed my plankton pump PAT tested, and the vessels being booked when I wanted to do a test run of my equipment, but those weren’t the only things that didn’t go to plan. My fieldwork volunteer also fell ill the weekend before we were due to go out on the ship, and the weather meant that I wasn’t able to visit many of the sampling stations I wished to go to. Luckily, sufficient planning and the connections I made by asking all those questions came to my rescue!

I’d discussed my work several times with one of the technicians at SAMS (we also happen to be friends), and they were able to take my volunteer’s place for the first two days of sampling. This gave me enough time to find some wonderful student volunteers for the latter part of the week. I’d also discussed my planned sampling stations with the ships captain two or three times before my planned work, which meant that together we were able to select alternative sites which would provide adequate data, but which were also safely accessible, given the weather conditions.

4) Be nice to people

That statement should be obvious, but in this specific context, having good relationships with people was really important in order that my fieldwork was successful. I needed to negotiate dates for my fieldwork with the SAMS Enterprise team (SRSL), and I’m not sure I would have been able to do so successfully without knowing the team fairly well. The facilities team were incredibly helpful in getting my kit PAT tested as soon as they were able, and helped me retrieve equipment from the locations in the ships shore where a forklift was needed (thank you!).

When poor weather struck during the week, I was able to work with the captain of the Seol Mara to select new sampling sites that would work for us both. To be honest, the ship’s crew were fantastic all week, helping me get to grips with my sampling routine, instructing the students on how to deploy equipment safely, and providing excellent jokes and conversation all week. Good relationships matter, folks! 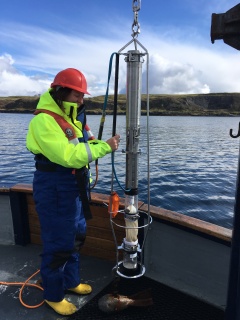 Sarah and the plankton pump

5) You definitely know what you’re doing – own it!

I realised this on day three on the ship after selecting new sampling sites and teaching one of the students how to transfer a plankton sample from the net to a jar for preservation. We were having a cup of tea while the plankton pump whirred away (you need to leave it 10-20 minutes to collect enough samples), and as I stared out across the Firth of Lorn towards the Isle of Mull I thought, “I am doing this. I feel confident. I can problem-solve. I understand how these decisions might affect my results. I’ve weighed things up. And it’s all going well!” I have learned that it is important to reflect on the times when you are confident in your work, and when things go well. Why did they go well? How did it feel? What are the signs that things will go well again?

On reflection, good planning and having many discussions with the ship and technical team before my fieldwork were really important (see above!). For me, reflecting on positive outcomes also really helps ‘imposter syndrome’ feelings, which I succumb to from time to time. I am a scientist – I led my own fieldwork campaign last week, all by myself (!). If I can do it once, I can do it again. Such a small thing might seem trivial to some, but it adds to the picture of other small successes that add up to feeling happy and confident in the job I do. And I definitely (some of the time!) know what I am doing! Say it with me: “I own this fieldwork! I am in charge! I know what I am doing!”

All smiles after a successful week!

What’s left in the bottom of the pump net – gold-dust! (er… plankton…) 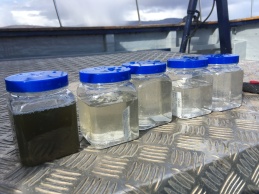 Five samples from different depths. The deepest is on the right, shallowest on the left.

It’s now the week after my four days on Seol Mara. I can honestly say that the 45 jars of plankton samples, with their shiny blue plastic lids, give me more happiness than is probably reasonable for most non-zooplankton scientists. I can’t wait to look at them in the lab. I can’t wait to have all of the data together, and to compare it with my findings from 2011. Ecological fieldwork is not easy, to plan, or to carry out. In investigating the ins and outs of mother nature, you are also at her whim. Fieldwork is challenging, but oh so worth it